I assume readers already know the definitions of:

By radar theory, the (azimuth) resolution \(\) of a real aperture radar is proportional to the wavelength \(\), the distance to the object \(\), and the inverse of real aperture size \(\): (derivation 1)

Azimuth is the direction parallel to the moving path. So if the size of the real antenna is big enough, we need no additional algorithm to achieve a precise imaging results. 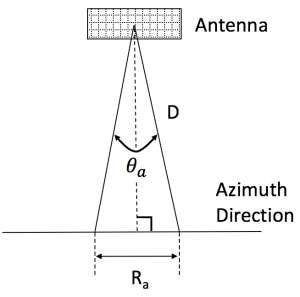 But this is not the case usually. When distance is long and wavelength is large, the required antenna size can be over meters. So here we get the Synthetic Aperture Radar, or simply SAR. The basic idea is to leverage the movement to emulate a large antenna with a small one.

Depending on the way of SAR algorithm, the azimuth resolution is different. The first one is called spotlight SAR, also known as focused SAR. 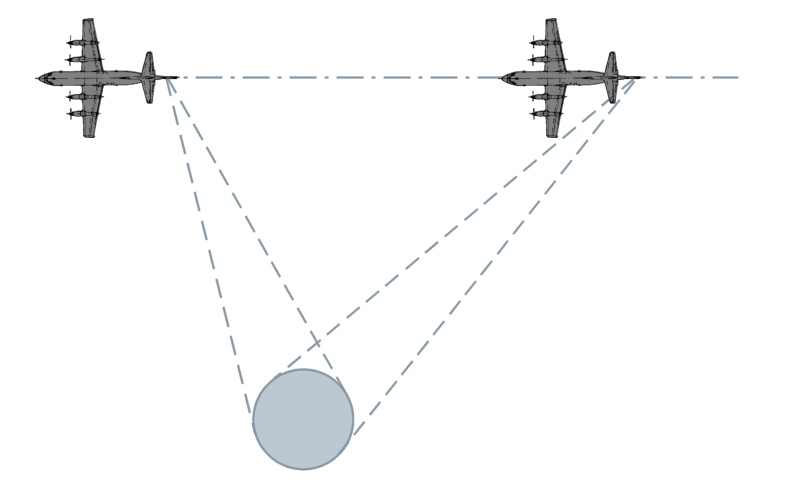 The benefit of this type of SAR is that we can leverage the entire radar footprint width to be used as the synthetic aperture length. In this case, we can obtain an optimal azimuth resolution: (derivation 2)

From the equation above, the smaller the actual antenna, the finer the azimuth resolution. This might seem wrong and non-intuitive at all. The physical meaning of this is that a small antenna will have a wide lobe, and thus the target will be seen for a longer time. Thus assuming the synthetic aperture length large enough (larger than the footprint), we will have such an optimal resolution.

The resolution of Spotlight SAR is not very practical since

Therefore, along with the movement of device (like plane), the radar footprint width is actually limited. So as the size of the antenna aperture.

The second is named stripmap SAR, which tends to have a more practical analysis. 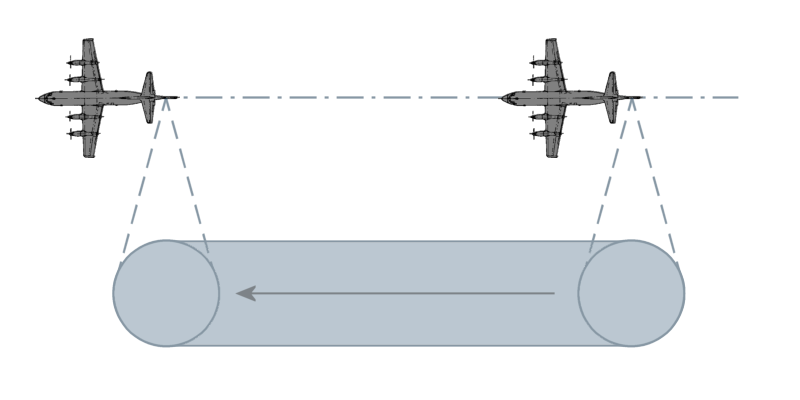 Assuming allowing a maximum of \(\) phase variation, the resolution of the Stripmap SAR is: (derivation 3)

Notice that this method does not account for the phase change while maintaining a small resolution comparing with the real aperture radar.

The assumption here is that the beam width is small enough to allow us to make the approximation \(\).